Today, a new energy revolution is taking place around the world, and many countries, including China, are shooting for carbon neutrality. At the China-Germany Summit on Overseas Development of Smart New Energy Vehicles 2021, Gotion High-Tech Senior Vice President Li Chen delivered a speech titled "A Critical Overview of Gotion High-Tech's Internationalization and Carbon Neutral". 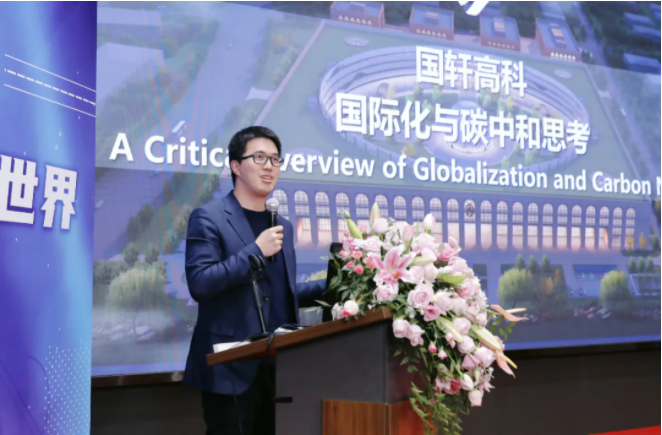 Li said that in terms of energy for production, transportation, and consumption, energy used in production in the future would no longer depend on traditional types, preferring new types such as photovoltaics, wind energy, and hydropower. The energy produced needs to be stored by energy storage technologies such as batteries. The transport will transmit electricity via extra-high voltage technology.

"The heart of low-carbon transportation is the full life-cycle carbon management of vehicles." Li noted that the market share of electric vehicles continues to rise. By 2050, the proportion of electric vehicle sales will outpace that of fuel-powered vehicles significantly, and their energy consumption will also be much lower than that of fuel-powered vehicles. Energy consumption can be reduced by about 80-90%. The development of new energy vehicles will lead to a shift in carbon emissions within the automotive industry from the use phase to the manufacturing phase.

Li spoke about how low-carbon transportation could reduce energy emissions by 25% through renewable energy and low-carbon fuels, including clean hydrogen. In regards to battery materials, carbon emissions can be reduced by 10% through positive and negative electrode materials, diaphragm, and electrolyte, and another 15% through low-carbon batteries and frames; in production, 15% can be reduced through supplier management and the use of renewable energy; in the use phase, the electrification of cars can be promoted for a reduction of approximately 30% to finally achieve a low-carbon energy transition through a 5% float, thus achieving a reduction to emissions of more than 90%.

"By focusing on the low-carbon operation of the entire battery industry chain, Gotion High-Tech forms a closed-loop from research and development to raw materials, production, application, and final recycling, which is our model to realize total low carbon operation." Li said.

So, what is Gotion High-Tech's low-carbon plan for its global footprint?

According to Li, Gotion High-Tech has actually been in the overseas market since 2014 and is already involved in solar projects in the United States, including the second largest energy storage project in North America (72 MWh). The project was an energy storage and frequency regulation solution that the company worked on with the top six wind power plants in North America in 2019. Gotion High-Tech also used it as an opportunity to expand its presence in Europe.

In addition, Gotion High-Tech has established an institute in Silicon Valley, U.S. In 2017, it acquired a BASF laboratory. It also promotes energy storage systems in Singapore in partnership with Nanyang Technological University and electric vehicles in India in a joint venture with Tata.

"In Germany, the company has just acquired Bosch's Göttingen plant. We will transform it from a traditional auto parts manufacturer and after-sales service provider to a supplier that focuses on battery systems and the new energy industry. “At the same time, we also signed a strategic cooperation agreement with Volkswagen in Europe. “These moves represent an expansion of Gotion High-Tech's global presence." Said Li Chen.