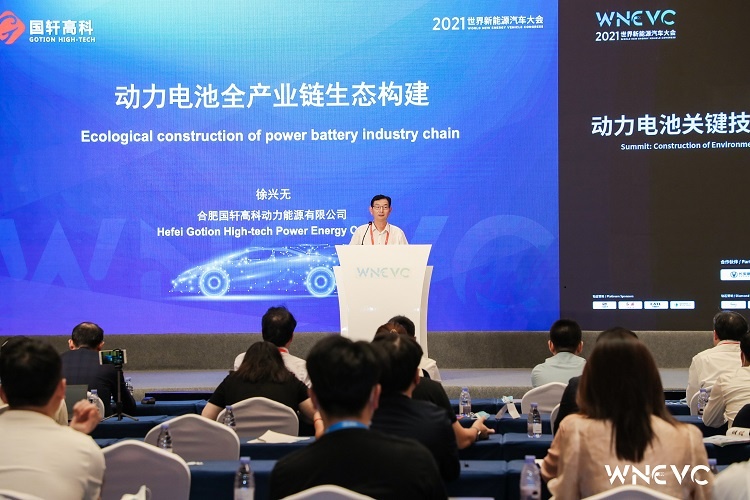 He noted how lithium-ion batteries and the entire new energy vehicle industry were booming this year. In August, market penetration of new energy vehicles had reached 17%, marking the bona fide arrival of the era of industrialization. At the same time, the power battery industry was about to usher in the TWh era. Therefore, the sustainable supply of raw materials had become a serious issue.

The resources used in the parts and components of the new energy industry were limited. Cobalt ore, in particular, was in short supply in China. In contrast, China is relatively rich in lithium and had more reserves of iron ore and phosphate. Gotion High-Tech chose to follow the lithium iron phosphate route because lithium iron phosphate resources were capable of supporting the development of the industry.

In the face of limited resources, resource recovery was an important path along which the industry could achieve sustainable development. Gotion High-Tech had built a recycling base in Feidong, Hefei to engage in the echelon utilization and recycling of battery resources. The company also had the technology to make iron phosphate from Masteel's waste pickle liquor, which would further reduce the raw material cost of lithium iron phosphate.

In terms of materials, improving element allocation, doing comparative balance, and choosing materials with better comprehensive performance are also important ideas to solve the resource problem. For example, using less cobalt and more manganese can reduce dependence on resources in short supply and lower battery costs. Gotion High-Tech's technology route does not necessarily bring cobalt down to 0, but the proportion can be controlled at 3% or 1%.

In addition, Gotion High-Tech places great emphasis on the full cycle design of batteries. This means that in the battery design stage, it takes into account stages such as mines, materials, and echelon utilization. Gotion High-Tech is already developing ultra-long-life batteries that take full account of the full cycle. The JTM cell, launched at the last Technology Conference, is also based on a full-cycle consideration. The technology, through standardized design and production of batteries, can be combined with the switching mode in the future to save energy by enabling users to assemble different numbers of batteries in different scenarios through intelligent automated guided vehicles (AGVs). As the battery capacity decreases, it is also possible to change batteries of different capacities from passenger cars to logistics vehicles, small vehicles, and energy storage products step by step to extend the battery life cycle and improve battery economy.

Xu concluded that although new energy vehicles develop rapidly, resources had become a key factor limiting the advancement of the industry. Therefore, it was imperative to build an ecological chain for the whole life cycle of power batteries. This also required that we encourage the development of lithium iron phosphate technology and improve the power battery recycling industry chain.